Disclaimer: Please read the Disclaimer at the bottom of this page.
Copyright © Educom Pty Ltd: All material on this website (including the text, graphics, videos and downloadable files) are owned by or licensed to Educom Pty Ltd and is subject to copyright and other intellectual property rights under international conventions.

Video Playback Issues: If videos don’t play, it could be because you’ve remained on this web page for too long or you’ve lost your Internet connection. To resolve this issue, simply “refresh” or “reload” this web page.

A Problem-Solving Exercise in History Taking and Physical Examination

The learning material in this unit is designed to improve your skills in history taking and physical examination. The material includes an example of clinical findings and their analysis using a problem-solving approach. As you read through the material and watch the videos, you are encouraged to identify whether all the required elements of history taking and physical examination have been adequately covered.

When taking the patient’s history, the practitioner needs to obtain sufficient information to cover the following essential elements:

• Who is the patient?
• Where is the pain?
• When was the onset?
• What caused the onset?
• What are the pain characteristics?
• What are the aggravating and relieving factors?
• What has been the course of the pain?
• Are there any associated symptoms?
• Is there a past history that is relevant to the current complaint?
• Are there any “red flags?
• What is the list of possible causes for the patient’s complaint?

Who is the patient and where is the pain?

When was the onset and what caused the onset?

You are seeing a 26-year-old female kindergarten teacher who presents with pain in the lateral sacrum and iliac crest on the right side. She says that it started around two weeks ago. She says that she recently took up tennis in an effort to lose weight and gain fitness and that it was during a match when she first noticed the pain. About midway through the match, she developed a mild discomfort on the right side of her lower back. When the match was over, she was still aware of the discomfort but it worsened the next morning. 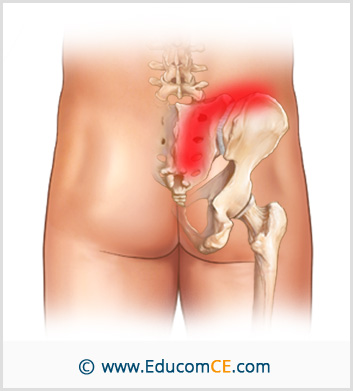 What are the pain characteristics?

What are the aggravating and relieving factors?

What has been the course of the pain?

She describes the pain as a deep “aching” and rates it as 5 out of 10 at its worse. She explains that the pain is brought on by certain movements such as bending forward, prolonged walking and lying on the right side. The pain is less after a warm shower and by placing a cold pack over the painful area for a short time. She says that she has no pain or other symptoms in her lower limbs and she does not experience any pain on coughing, sneezing or straining at the toilet.

Analysis: Since movement aggravates the pain, a mechanical origin is likely. Local pain brought on by flexion may indicate an extensor muscle origin but may also implicate spinal or sacroiliac joint involvement due to the increased load on these structures.

The aggravation of pain by lying on the involved side suggests a mechanical origin and may reflect tenderness in the soft tissue elicited by direct pressure, the presence of trigger points or from loading of the involved joints.

The reduction of pain after a warm shower could be due to muscle relaxation. The relief experienced when ice is applied could suggest an inflammatory origin or simply represent the analgesic effect of the ice.

The lack of radicular symptoms and the lack of pain on coughing, sneezing and straining at the toilet help to rule out the presence of a space-occupying lesion, causing neurological involvement such as a disc herniation.

Are there any associated symptoms?

The patient does not report any associated symptoms or concerns.

Is there a past history that is relevant to the current complaint?

She says that she has never injured her back or had any back pain before this episode. She has played tennis once a week for the last three months but prior to that, she undertook no regular exercises. She eats well but is trying to lose weight so has been careful to reduce the size of her meals.

Analysis: The lack of a past history of back injury or back pain suggests that this complaint is new and arose from the activity involved in her tennis match rather than an aggravation of a pre-existing condition. Her lack of fitness makes her vulnerable to musculoskeletal injury, particularly when physical demands are made.

Are there any “red flags”?

The patient is asked the following questions in order to identify any “red flags” that could indicate serious pathology. Even if the patient has already provided information in the case history that relates to these questions, it is recommended that they be readdressed to ensure a thorough exploration.

Do your symptoms disappear even for a short time? “Yes. There are times during the day when I am completely pain free.”

Does the pain wake you up at night? “I sometimes wake up in the night with pain because I’ve been sleeping on my right side. It quickly eases when I change my position.”

Have you noticed any discoloration of your urine? “No.”

Have you had any bladder or bowel problems since the onset of your pain? “No.”

Do you feel weak in your arms or legs? “No.”

Have you recently experienced any fever, chills, night sweats or vomiting? “No”.

Have you lost any weight recently? “No.”

Do you have a history of cancer or HIV? “No.”

Analysis: Considering the patient’s responses, there are no apparent “red flags”.

What is the list of possible causes for the patient’s complaint?

Based on the available history, several conditions could be involved and will need to be explored during the physical examination. These include:

Please stop and take a moment to consider whether the main requirements of an adequate and relevant patient history have been fulfilled. Are there any additional questions you would have asked and if so why?

Her vital signs are within normal limits.

Analysis: It is always important to examine the vital signs to screen the patient’s general health and help identify underlying conditions such as infection.

Analysis: The shoulder and pelvic symmetry and the presence of normal spinal posture reduce the possibility that postural imbalances or anatomical short leg are complicating or contributing factors.

Assessment of the lumbar active range of motion reveals normal and pain free movement in all directions except for the slight discomfort that is felt in the area of complaint on full flexion.

Analysis: This patient’s normal and essentially pain free lumbar active range of motion helps to reduce the possibility of a spinal origin for her pain. The local pain on full flexion could indicate extensor muscle involvement such as the gluteals and erector spinae. Sacroiliac joint or hip stabilizer involvement may also be indicated. That the pain is only felt in the area of complaint with movement is suggestive of a local mechanical cause for her back pain.

Superficial and deep palpation of the lumbar spine and related musculature is unremarkable. An assessment of the vertebral motion segment function is performed and is also unremarkable. There is slight tenderness elicited on palpation of the right sacroiliac joint. Palpation of gluteal muscles reveals exquisite tenderness in the area just below the right iliac crest, particularly in the posterior portion of the gluteus medius muscle. The pressure also causes a diffuse aching over the posterior iliac crest and the right side of the sacroiliac joint.

Analysis: The lack of findings on palpation of the lumbar spine helps to rule out lumbar vertebral motion segment involvement and injury to the paraspinal and intrinsic spinal musculature. Palpatory findings of gluteal muscles suggest that the gluteus medius muscle is the most likely source of the patient’s pain. The right sacroiliac joint could be involved which needs to be further assessed.

A screening neurological assessment is performed and reveals the following:

Analysis: These results help to rule out neurological involvement. Please watch the video below if you wish to view how a Neurological Screening Examination for Low Back Pain is performed.

Given the patient’s history and examination findings to this point please stop and take a moment to consider which special tests should be performed for this patient.

Considering the clinical findings at this stage of the examination a number of special tests are indicated. The Lumbar Quadrant test is performed on both sides and is found to be negative.

The Gillet’s test is performed and reveals a slight reduction in the right sacroiliac motion.

The Yeoman’s test is performed and is found to be negative.

Analysis: A negative Yeoman’s test reduces the possibility of sacroiliac joint involvement as the main cause for her pain. Please watch the video below if you wish to view how the Yeoman’s test is performed.

The Patrick’s test is performed and is found to be negative.

Please stop and take a moment to consider whether all the elements of an adequate and relevant physical examination have been completed for this patient. Are there any additional procedures you would have performed and if so why?

Myofascial trigger points are thought by many to be a common source of referred pain to the low back and posterior pelvic regions and should be included in the differential diagnosis of musculoskeletal causes of pain and disability.

Practitioners who manage patients with lower extremity pain should be competent in the examination and management of myofascial trigger points. This requires familiarity with the trigger point phenomenon and expertise in accurate assessment.

When myofascial pain is referred to the lumbar and posterior pelvic regions, the most likely sources are:

Gluteus Maximus
Referred pain from trigger points in the gluteus maximus is felt primarily in the buttock region. 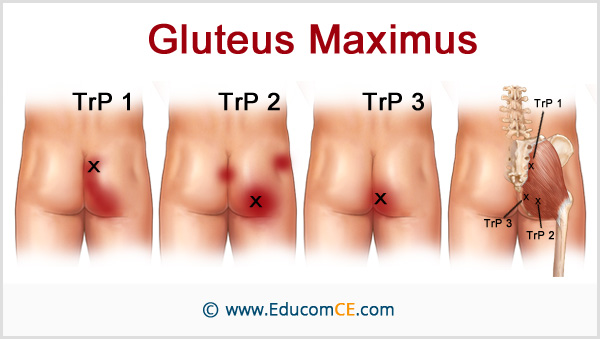 Quadratus Lumborum
Referred pain from the deep trigger points in the quadratus lumborum muscle is projected mainly to the sacroiliac and the lower buttock regions. The superficial trigger points in this muscle refer pain primarily to the crest of the ilium and to the greater trochanter. 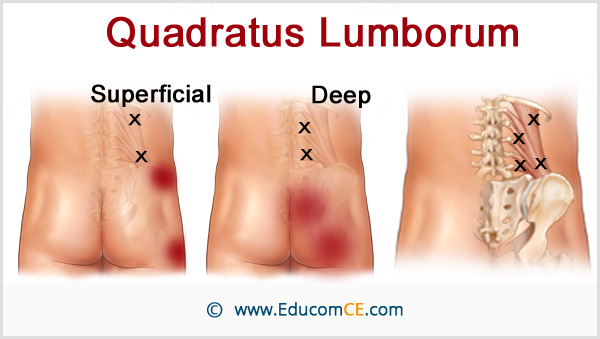 Multifidii
The trigger points in the multifidii refer pain mainly to the region around the spinous process of the vertebra adjacent to the trigger point. In the following image, two examples are shown: a trigger point at the L2 level and one at the S1 level.

Iliopsoas
Referred pain from the iliopsoas muscle extends vertically along the spine on the ipsilateral side and downward to the sacroiliac region. It may spill over to include the sacrum and proximal medial ipsilateral buttock. The referred pain pattern usually includes the groin and the anteromedial thigh on the same side. 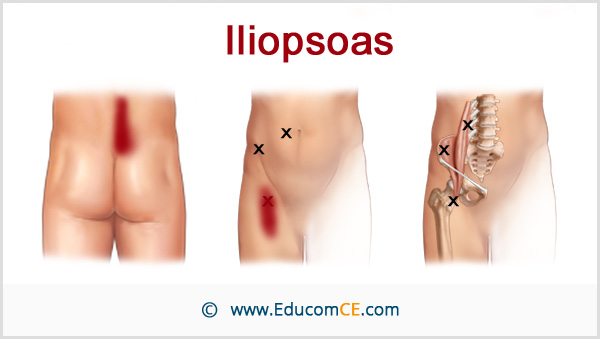 Ipsilateral activation of the trigger points of all the above muscles refers pain only to the same side. However, when trigger points are present on both sides, the patient may perceive the pain as running across the low back.

Disclaimer:  The Educom CE ™ website (including the text, graphics and videos that appear on the EducomCE.com) are designed to offer users general health information for educational purposes only. The general health information furnished on this site is not intended to replace personal consultation with a qualified healthcare professional. You must always seek the advice of a healthcare professional for questions related to your disease, disease symptoms, and appropriate therapeutic treatments.

Copyright © Educom Pty Ltd: All material on this website (including the text, graphics, videos and downloadable files) are owned by or licensed to Educom Pty Ltd and is subject to copyright and other intellectual property rights under international conventions.